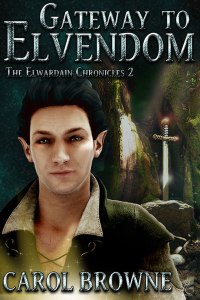 Recently, my publisher’s hugely talented art director, Kelly Shorten, sent me her mock-up cover art for Book Two of my fantasy series The Elwardain Chronicles. A few tweaks here and there, and the final cover art is now official. I am extremely pleased to be able to feature it on my blog today.

Book Two, Gateway to Elvendom, is still in the editing process. In fact we’ve been working on the line edits for some time now, but so far we are on target for the planned release date – 20th March, 2015.

Readers of Book One, The Exile of Elindel, can rest assured the main characters will be in Book Two, but there are many new characters to keep them entertained!

Here’s the blurb to give you some idea of what’s in store!

Godwin is a changed man since his adventures in Elvendom, and now bereavement has darkened his world.

In another dimension, a new Elvendom is threatened by the ambitions of a monstrous enemy. Who – or what – is the Dark Lady of Bletchberm?

Godwin agrees to help Elgiva’s people. In a strange world of goblins, fairies, and time travel, will he succeed in his quest to remove the new threat to Elvendom, or will the Dark Lady destroy everything the Elwardain strove to preserve?

And who is the intriguing chap on the cover? You’ll have to read Gateway to Elvendom to find out!