Being Agnieszka: a Character Interview with a Difference

Many authors interview characters on their blogs and these are usually fictitious, but today I am interviewing a character from one of my books who also happens to be a real person. She is Agnieszka Coutinho who appears as the reluctant biographer in my non-fiction novella Being Krystyna which was published by Dilliebooks on 11th November, 2016.

Good afternoon, Agnieszka. I’m very excited to have you on my blog today so let’s get started with the first question! When I decided to use you as Krystyna’s biographer, rather than myself, I believed it would enable me to make a contrast between the life experiences of two Polish women of different generations. Do you think this was a good way to tell the story? How does it feel to be a ‘character’ in a book, and are you happy with how you have been portrayed?

Thank you for having me here, Carol. Let me start by saying that the story was written in a very creative and extraordinary way. I agree that the contrast between a modern Polish woman and an older one who survived World War II is intriguing. I am sure that anyone, even people without prior knowledge of the war, would listen to Krystyna’s story with real interest. Yes, I am happy with the way I was portrayed in the book. How does it feel to be a ‘character’ in a book? It’s somewhat unreal. But it’s a great feeling too…like a part of me will live for a lot longer thanks to this book.

I grew up in the UK with certain ideas about World War II but for you in Poland the picture must have been very different. Poland suffered horrendously under Nazi occupation. When you were growing up, what were your impressions of this period of history?

We learn history chronologically in Poland (I was very surprised that it is different in England) but World War II topics are covered several times during primary and secondary school because of the many significant dates when various annual events are organised in the country and it is important than even young students know what happens and why. I also learnt what life was like in wartime from listening to my grandfathers.

When I was ten my whole class went to Warsaw to see the Tomb of the Unknown Soldier. When I was sixteen, I entered a competition about a Polish priest—Frelichowski—who helped people in the war camps even though he knew he was risking his own life. Reading about him to prepare for the competition, I found out many things I didn’t learn from the compulsory books I read in school.

I think the majority of Poles are aware of the important dates related to different events and periods of the war and the Nazi occupation. We have lots of books on these topics, some written by survivors.

I know that books about the war are sad but often they have happy endings too and they always have some important lessons and messages for us. That’s why everyone should read at least a few…

You came to the UK in 2005 to find work and you didn’t speak English. You are now fluent in English and Portuguese, you have obtained two degrees, you are married with a daughter, and you work as a Senior Administrator in the NHS. I have to say that you are not only a dear friend but also one of the people I most admire in the world. What have been the hardest things to deal with since moving to the UK?

Thank you very much! You can’t see it but my face is red now! 😉 Human beings tend to focus on problems too much and they do forget how much they have achieved in their lives and it’s nice to be reminded of it!

The hardest thing was to survive in factories and restaurants haha 😉 These jobs aren’t the best but they are good temporarily—to teach us patience, hard work and to make us appreciate other jobs.

I think learning English to an intermediate level was very easy but an advanced/fluent level is a bit of a pain sometimes as there are so many idioms, and slang words, and the language has changed a lot. You need to watch a lot of TV (which I don’t have time for) and socialise too (no time for that either) to ensure your spoken everyday language is as perfect and up to date as possible. I always wished I had some English friends who I could hang out with sometimes but if I had come here when I was a child, I know it wouldn’t be a problem. It is a harder to feel fully accepted when you are an adult and don’t speak perfect English. I seemed to get along better with older English people rather than those in my age group.

And what do you like about living here? What experiences have made you glad you came? Do you get homesick for Poland or do you see the UK as home now?

I think moving to the UK was one of the best decisions in my life. I came here on a gap year, but after just a few months in England my life changed enormously. When people ask me why I stayed here for such a long time one word comes to mind: opportunities! I feel that this country gives me so many opportunities to develop myself, to choose a job I’d like to do rather than do something I don’t enjoy because there are no jobs… The courses, workshops, events, and the opportunities to learn about ourselves and the world are endless here! Also, the quality of life is better than in Poland. I can afford more than I probably would if I stayed in Poland.

I wouldn’t like to live in Poland anymore. Poland is an amazing country and I love to go back for holidays there and I visit at least once a year. However, because of the opportunities and better quality of life that I’ve mentioned before, I prefer to live here.

To tell the truth, Poles felt betrayed by France and the UK at the beginning of the war. There were agreements signed before the war that Poles would receive financial and military help in a case of a war; however, we didn’t receive any help for quite a long time.

On a more positive note, when Warsaw fell and Germany announced victory, Great Britain didn’t want to accept it. I think later, after 1939, we had more support from the allies and developed a better relationship with the UK. Many Polish pilots decided to support this country in the famous Battle of Britain.

I don’t have much knowledge of the exact support we received during and after 1940, but by asking me this question you motivated me to explore this aspect a bit more, especially as I live in the UK now.

You have been writing yourself, although I know your busy schedule leaves you very little time for it. Can you tell us something about your book?

I promised myself I won’t talk about it much until I finish writing, but I will make an exception and tell you a few things. I wrote a book about my experiences in the UK—all in the form of a diary in Polish. I also wrote a book in English about productivity, motivation, and personal development, because I really enjoy learning about these topics and I’ve discovered a lot of interesting research findings while studying psychology.

Both of these books are finished but I have to do a lot of work on editing yet. I want to improve them and I have lots of notes I want to add as well; it’s a very time-consuming process as you know.

I also wrote a children’s story which I’ve sent to a publisher and hopefully I’ll have some news regarding that soon. Fingers crossed! 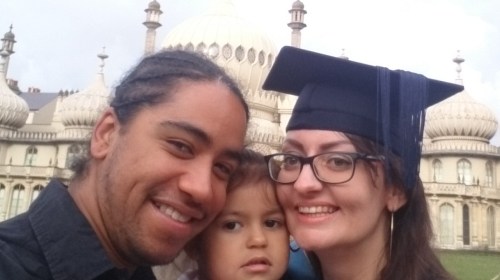 4 responses to “Being Agnieszka: a Character Interview with a Difference”